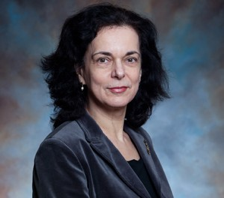 Olga Anna Duhl, Oliver Edwin Williams Professor of Languages and founder and co-chair of the medieval, renaissance, and early modern studies program, was recently elected for induction into the French Republic’s prestigious Ordre des Palmes Académiques (Order of French Academic Palms) at the grade of “chevalier.”

Author, editor, and translator, Duhl has published extensively on topics related to French language, literature, and culture. The French Academic Palms recognizes those who have rendered eminent service to French education and have contributed actively to the prestige of French culture.  For those who are named and promoted in the Order of the French Academic Palms (l’Ordre des Palmes académiques), this esteemed distinction acknowledges their merits, talents, and exemplary activities.

The Palmes académiques was created by Napoleon I in 1808 as an honorary title to recognize members of the University.  The academic palms became a decoration in 1866, under Napoléon III, at which time the honor was also extended to non-teaching persons who had rendered illustrious service to French education. Thus, the Palmes académiques is the oldest non-military French decoration. Today, it recognizes the significant contributions of teachers through their teaching, scholarship, and leadership over the course of their careers. It is also bestowed upon a select group of individuals who, though not members of academia have demonstrated outstanding devotion to the French language and culture. The Palmes académiques is awarded by the prime minister of France upon the recommendation of the Ministry of Education.