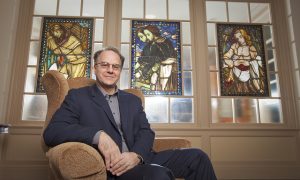 In June, Ziolkowski made his fifth professional trip to China in the past five years, teaching a two-week seminar in the Department of Foreign Languages and Literature, Beijing Normal University, Beijing. The course, “Religion, the Family, and American Culture,” focused on four novels. While in Beijing, he gave two lectures at two other Beijing institutions: “When the Twain Did Meet: Chicago’s 1893 World’s Parliament of Religions,” for the Institute of World Religions, Chinese Academy of Social Sciences (CASS); and “Fleeing and Escape in Augustine’s Confessions and Kierkegaard’s Repetition: Two Instantiations of a Universal Motif,” at Renmin University.

Prof. Ziolkowski has two new edited books in production that will be in print shortly: “The Bible in Folklore Worldwide, vol. 1: A Handbook of Biblical Reception in Jewish, European Christian, and Islamic Folklores” (to be published by De Gruyter in Berlin) and “Kierkegaard, Literature, and the Arts” (Northwestern University Press).

Also in production and due to appear soon is volume 15 of the “Encyclopedia of the Bible and Its Reception” (a.k.a. EBR, published by De Gruyter), of which Ziolkowski is the main editor of reception. The publication of this volume will mark the half-way mark of this prospective thirty-volume project, whose first volumes appeared in 2009.

For an upcoming volume of EBR, Ziolkowski is especially pleased to have commissioned an article on Louis Massignon by a former student and Religious Studies major, Christian Krokus, ’97, who now teaches in the Department of Theology/Religious Studies at the University of Scranton.