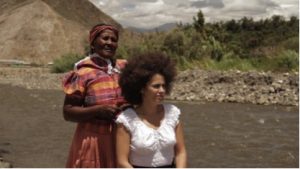 Prof. Skvirsky was awarded a Fulbright fellowship and a Jerome Foundation Grant to produce “The Perilous Journey of Maria Palacios”, a performance-based film that draws parallels between a teenage girl’s journey through the mountains of Ecuador and the indigenous and Jamaican workers who constructed the most dangerous stretch of railway in the world. The work investigates issues of race and class and examines gender through the intersection of labor and migration. Maria Rosa Palacios is Skvirsky’s great-grandmother, an Afro-Ecuadorian and descendant of slaves.

The video and a series of works on paper, curated by Dan Cameron, premiered at the 2016 Cuenca Biennial in Ecuador where they were exhibited from November 2016 to January 2017. The works on paper were then exhibited in at the Ponce + Robles Gallery in Madrid, Spain and at the Dorsky Gallery in NYC. In the Fall of 2017, Skvirsky will have a solo exhibition at Smackmellon in New York City.

Says Skvirsky, “My great grandmother, as an Afro-Ecuadorian migrant worker, has been fundamental to my artistic production allowing me to learn about cultural transformations and the implication of the liberal revolution in Ecuador. In addition she represents many ideas I have been asking that reference my racial genealogy and explore how personal memories intersect with history and collective memory.”